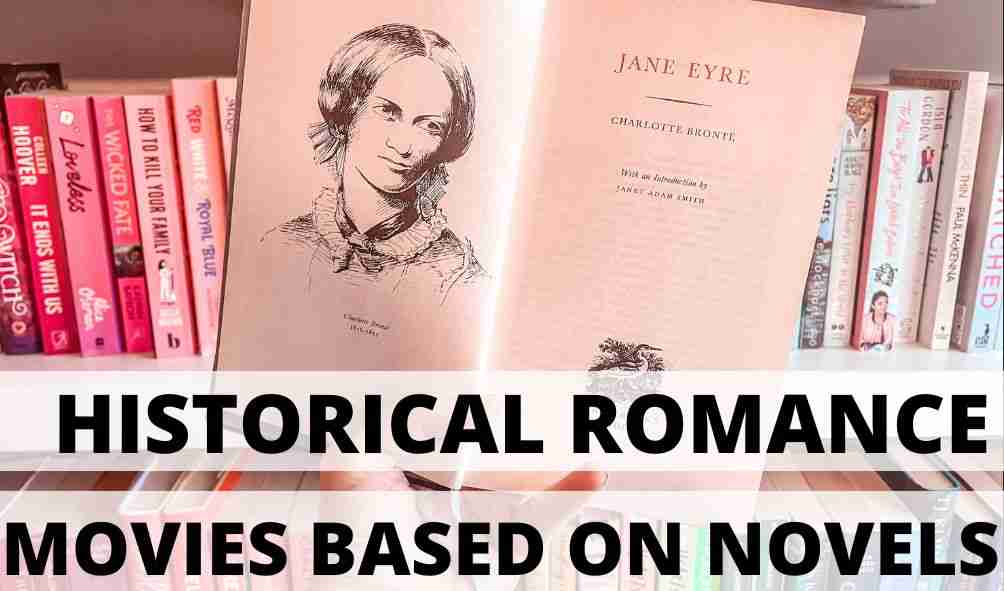 Historical romance movies based on novels

I’m a huge fan of historical entertainment. Period dramas have always been my comfort genre. And historical fiction really helps me to understand an event or person.

From the beautiful costumes to the romance and history, there is something so romantic about a historical movie. And historical romance movies based on novels can either be incredible or miss the mark completely.

So what historical romance adaptations get it right? And which ones miss the mark completely.

If you’re searching for period dramas to binge watch then you’re in luck. I’ve compiled the absolute best historical romance movies based on novels.

The Best Historical Romance Movies Based on Novels

These are suggestions for movies and TV Series that have already been released. There are some fantastic upcoming adaptations that I'm super excited about. You can check out this post from Collider to see upcoming book adaptations.

If you're looking for movies based on books I have a few more posts you might want to check out:

19 Romance movies based on books (How many have you seen?)

18 of the best shows and movies based on LGBTQ+ books

Jane Eyre is hired by Edward Rochester to care for his ward Adèle. When she arrives at Thornfield Hall she starts to fall in love with Rochester.

But there is a terrifying secret looming within the walls at Thornfield Hall. So what is Rochester hiding from Jane?

The 2005 adaptation of Pride and Prejudice is one of my all-time favourites.

Pride and Prejudice follows a group of daughters. Mrs Bennet insists they find rich husbands and settle down. And when a wealthy bachelor moves nearby, she’s very happy.

Keira Knightley’s acting in this movie is superb. You can really see how Elizabeth Bennett and Mr Darcy are drawn to each other. And the cinematography is beautiful.

Maurice is a romantic drama. And an adaptation of the 1971 novel Maurice by E.M Forster.

A young man is trapped by the oppressiveness of Edwardian society. His lover rejects him. And he tries to accept his sexuality.

This is a powerfully emotional and touching movie. Plus it also stars a young Hugh Grant as Clive.

Little Women follows the March sisters. They are entering womanhood. And they have to make important decisions that will affect their future.

Little Women is one of my top cottagecore movies. And for me, it’s one of the best movies from 2019!

It’s an incredible adaptation. Whether you’re a fan of the books or cottagecore you need to watch it.

Northanger Abbey is a 2007 British television film adaptation of a Jane Austen classic.

Catherine Morland moves to Bath to stay with the childless Allen family.

Introduced to society, she attracts the attention of two men. But her overzealous imagination begins to jeopardize her social position.

Emma is a self-proclaimed matchmaker. She meddles in her friends’ love lives. but her missteps lead her to find love.

Both the 2020 and the 1996 versions are excellent. Clueless was based on Emma. So if you like Clueless, you’re guaranteed to enjoy Emma!

Atonement follows Briony Tallis. She catches her sister in a compromising position. And so she falsely accuses her sister’s lover of a crime.

The story is astonishing. And the movie is beautifully made and filmed. I adore the score for this movie which won an Academy Award.

8. Far From the Madding Crowd

Far From the Madding Crowd follows a young woman. She deals with the trials and tribulations of life. And at the same time, she deals with the attention of three men: a sheep farmer, a Sargeant and a mature bachelor.

Far From the Madding Crowd is a classic novel. And this is an excellent adaptation. Carey Mulligan is always fantastic in classic adaptations.

9. Gone with the Wind

Gone with the Wind is a classic historical fiction originally published in 1936.  It follows Scarlett O'Hara, the spoiled daughter of a well-to-do Georgia plantation owner. She must use every means available to get out of the poverty she finds herself in after Sherman's March to the Sea.

Rebecca is raved about by its fans. It sold 2.8 million copies between 1938 and 1965.  And it has never gone out of print. Also in 2017, English bookworms voted it their favourite book of the past 225 years.

The novel opens in Monte Carlo. The young protagonist is a companion for an American woman Mrs Van Hopper.  She meets Maxim De Winter who completely sweeps her off her feet. And he proposes.

But when they arrive at Manderley country estate she realises how large a shadow his late wife will cast over their lives.

You couldn't write a post on romance movies based on books without mentioning The Notebook! This 2004 movie was adapted from the Nicolas Sparks novel.

It follows poor yet passionate young man who falls in love with a rich young woman. This romance gives her a sense of freedom. But they are soon separated due to their social difference.

Sense & Sensibility is a 1995 adaptation of the classic Jane Austen Novel.

It follows Elinor Dashwood and her sister Marianne. They experience sudden destitution and try to change their fortunes through courtship.

It stars Kate Winslett and Emma Thompson.  Thompson even wrote the screenplay originally intending another actress to play Elinor Dashwood.

Lady Chatterley's Lover is a recent adaptation of the D.H Lawrence Novel. It's notorious for the explicit smut. It's even banned in several countries.

It shows a frank portrayal of an extramarital affair. The explicit sexual exploration made this book controversial and it was banned until 1960. But it's now considered a masterpiece.

Brooklyn is based on Colm Tóibín’s Costa Award-Winning novel  and features Saoirse Ronan as Eilis.

It's set in Brooklyn and Ireland in the 1950s and it follows one young woman who  crosses the ocean to make a new life for herself.

Eilis grew up in a small town in Ireland in the years following World War Two. But she can't find a job in the miserable Irish Economy.

An Irish priest from Brooklyn offers to sponsor Eilis in America to work in a Brooklyn neighborhood. She decides she must go leaving her family behind.

The Guernsey Literary and Potato Peel Society is a historical romance movie set in the 1940s. It's based on the best-selling book written by Annie Barrows and Mary Ann Shaffer

It follows Author Juliet Ashton. She discovers a secret book club.  The Guernsey Literary and Potato Peel Society was created as an alibi when its members were discovered breaking curfew by Germans operating their island.

Juliet begins corresponding with the members and learning about their island. Captivating by their stories, she sets sail for Germany, and what she finds will change her life.

This is such a charming movie. It features some of my favourite actors. Lily James can do no wrong and is incredible  as Juliet.

16. Miss Pettigrew Lives for a Day

Miss Pettigrew Lives for a Day is a charming romantic comedy set in 1939. It's based on the novel of the same name by Winifred Watson.

It Follows Miss Pettigrew - a middle-aged governess.  She's unexpectantly sent to the wrong address and becomes the secretary for a vivacious nightclub singer.

Miss Pettigrew encounters a kind of glamour that she had only met before at the movies. Over the course of a single day, both women are changed forever.

This post was all about historical romance movies based on novels