There is nothing better than curling up with a good fantasy movie. Especially when it’s a movie based on a good fantasy book. But movie adaptations are so hit and miss. That’s why I’ve compiled the best movies based on Fantasy Books. 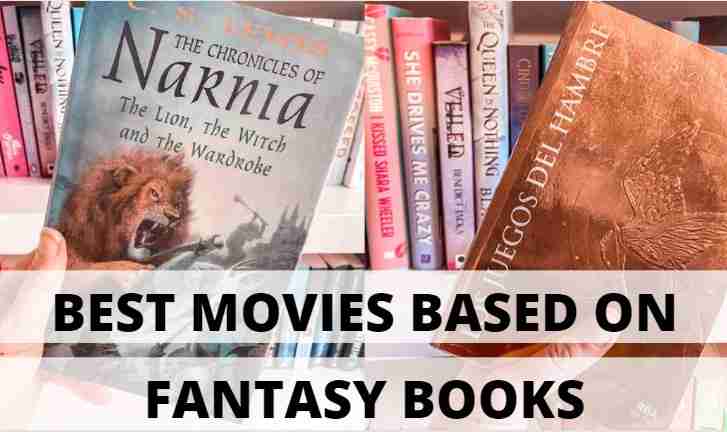 You can’t beat a cozy movie night. And there is something so intriguing about seeing your favourite fantasy book become a movie. But the visual effects, fantastic worldbuilding and plot mean it’s difficult to do the book justice.

But sometimes you find a rare gem where the movie is even better than the original book. In this post I’ve rounded up movies based on fantasy books that you NEED to see.

What are the best movies based on Fantasy Books?

These are suggestions for movies  have already been released. There are some fantastic upcoming adaptations that I'm super excited about. You can check out this post from Collider to see upcoming fantasy book adaptations.

1. Lord of the Rings

Lord of the Rings follows Frodo Baggins. In ancient times the Rings of Power were crafted by Elven-smiths and Sauron (the Dark lord). But in secret Sauron forged the One Ring so he could rule all others.

But the One ring was taken from him.

After many ages it fell, quite by chance, into the hands of hobbit Bilbo Baggins. At his eleventy-first birthday Bilbo disappears and bequeaths it to Frodo. Frodo must embark on a perilous quest to destroy the One Ring.

Rating: Fellowship of the Ring -PG, The Two Towers & The Return of the King -12A

2. School for good and evil

This Netflix original has received so much positive praise online and I knew I had to include it.

It follows best friends Sophie and Agatha. They're about to discover where all the lost children go - the School for Good & Evil. A School where ordinary boys and girls are trained to be fairy tale heroes and villains.

Sophie has always dreamed of being in an enchanted world. And she knows she'll earn top marks at the School for Good.

Meanwhile Agatha, with her shapeless black frocks, wicked pet cat, and dislike of nearly everyone, seems a natural fit for the School for Evil

I thought I would start with one of the most popular movies based on a YA Fantasy book. The Hunger Games is an incredible adaptation of a trilogy of YA dystopian books.

The Hunger Games takes place in Panem. A Capitol surrounded by twelve outlying districts. The Capitol keeps the districts in line by forcing them all to send one boy and one girl between the ages of twelve and eighteen to participate in the annual Hunger Games, a fight to the death on live TV.

Sixteen year old Katniss Everdeen lives alone with her mother and younger sister. And she regards it as a death sentence when she steps forward to take her sister's place in the Games.

Neverending story follows Bastian. He is drawn into the beautiful but doomed world of Fantastica. Only a human can save this enchanted place by giving its ruler, the Childlike Empress, a new name.

But the journey to her tower leads through lands of dragons, giants, monsters, and magic. And once Bastian begins his quest, he may never return.

Stardust is such an underrated movie. It's easily one of the best movies based on a YA Fantasy book. It's beautiful and whimsical with an excellent storyline.

Hugo is a young orphan. He loves the station clocks. And his most treasured possession is his late father’s automation.

Therefore, his mission is to find a key that will get it working.

This is a powerfully emotional movie. And it’s another great movie to watch with family. The story is captivating and magical.

8. The Chronicles of Narnia: The Lion, The Witch and The Wardrobe

The Lion, the Witch and the Wardrobe is an absolute classic. And it has one of the most magical secret fantasy worlds.

The Chronicles of Narnia follows four children who are evacuated to a country house. They find a magical kingdom called Narnia at the back of a wardrobe.

But Narnia has been enchanted by a White Witch. And it is frozen in an eternal winter.

The Lion, The Witch and The wardrobe has one of the most magical concepts behind it. The concept is also familiar to everyone and makes it easy to follow.

It follows Lyra. She's a small girl who is rushing to the cold North, where the Gobblers take the children they steal--including her friend Roger.  Where her uncle Asriel is trying to build a bridge to a parallel world.

Can one small girl make a difference?  Lyra is as fierce and true a champion as either Roger or Asriel could want. But to help one of them she must betray the other.

Coraline is a personal favourite of mine. It's a creepy, atmospheric read perfect for autumn.  Plus it's an absolute classic.

Coraline is fed up with the lack of attention from her parents. In her  family's new flat are twenty-one windows and fourteen doors. Thirteen of the doors open and close. The fourteenth is locked, and on the other side is only a brick wall, until the day Coraline unlocks the door to find a passage.

She discovers another flat identical to her own. And a family from a parallel universe  who give her everything she could possibly want. But is everything as it seems.

You can't beat a good retelling. There are so many good Beauty and The Beast Retellings. And this movie adaptation doesn't disappoint.

Beastly is a contemporary YA Fantasy retelling where you can find out what Beauty and the Beast was like for the Beast.

It follows Kyle  Kingsbury and is set in New York City. He was a  happy guy with perfect looks, money and the perfect life.

But a witch casts a spell on him. And he becomes a beast. And he will stay that way forever unless he can break the spell

It's set in New York City and follows the Beast. He will still a Beast forever unless he can break a spell the witch cast on him.

Conor has the same dream every night, ever since his mother first fell ill, ever since she started the treatments that don't quite seem to be working.

But tonight is different.

Tonight, when he wakes, there's a visitor at his window. It's ancient, elemental, a force of nature. And it wants the most dangerous thing of all from Conor. It wants the truth.

Another absolute classic that I had to include. Wizard of Oz is such an incredible adaptation of a fantasy book. And a childhood classic for many people.

It follows Dorothy and her dog Toto. They find themselves stranded in Oz. Dorothy sets off on the yellow brick road to find her way to  Emerald City and the Wizard of Oz. Only they can help her get home.

On her journey she's joined by her companions - the Scarecrow, the Tin Woodman and the Cowardly Lion.

The Wizard of Oz is an enchanting and captivating children's classic. It's full of whimsy and adventure. One of those movies that sets the standard for fantasy adaptations.

14. How to train your dragon

In my humble opinion this is one of the best animated movies. It's such a well done adaptation that really captures the heart of the original Cressida Cowell book.

How to train your dragon is adapted from the  middle grade book of the same name. It follows Hiccup who is the quiet son of the Chief of a Viking Clan.

He must pass an important initiation test by catching a dragon. Can Hiccup do it without being torn limb from limb?

There are many incredible versions and adaptations of Peter Pan. However, no adaptation truly catches the magic and whimsy of the original text in the same way as the 2003 version.

Peter Pan is a mischievous boy who refuses to grow up. He lands in the Darling's middle-class home to look for his shadow.

In the process he befriends Wendy, John and Michael. Together they fly off to Never-land where they encounter the Lost Boys, pirates and Captain Hook.

Dune is the story of the boy Paul Atreides - heir to a noble family. He is tasked with ruled an inhospitable world where the only thing of value is “spice” melange, a drug capable of extending life and enhancing consciousness.

When House Atreides is betrayed, the destruction of Paul's family will set the boy on a journey toward a destiny greater than he could ever have imagined.

This post was all about movies based on Fantasy Books

The best Cottagecore movies to watch

The best fall movies to watch Get the Printable Reading Journal