Home » Movies and TV Shows » 19 Romance movies based on books (How many have you seen?)

Sometimes I crave a really good romance movie. Whether that’s wholesome, heartbreaking or emotional, you can’t beat a romance. As a book lover, I especially enjoy a good book adaptation. That's why I've compiled the best romance movies based on books. 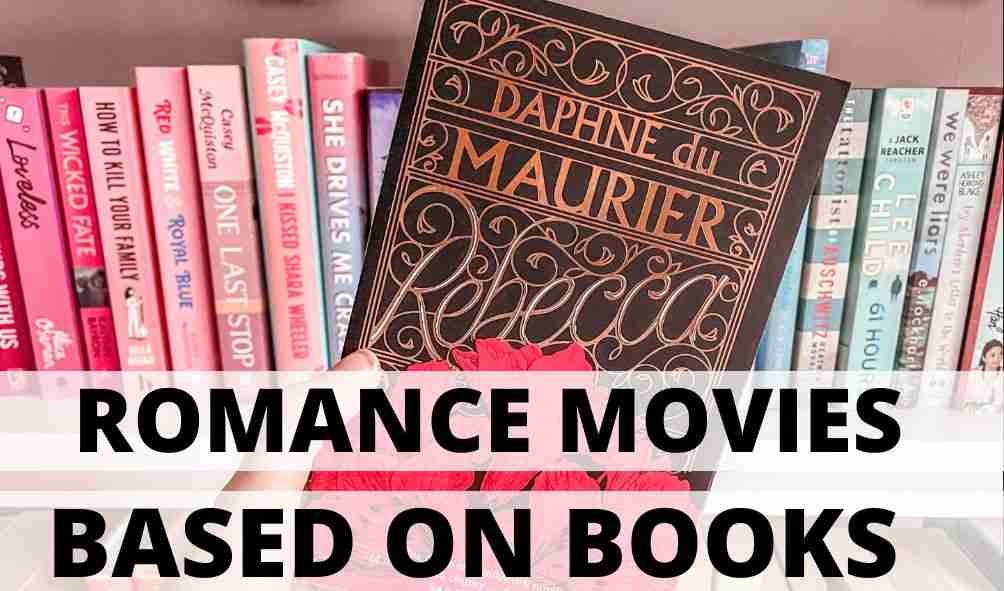 Romance movies based on books

You can't beat a cosy movie night watching a good romance movie adaptation. But while there is something so intriguing about seeing your favourite book brought to life, romance movies are so hit and miss.

Some romance movies are swoon-worthy with compelling storylines and incredible acting. But others are just plain toxic or have no effort put into the storyline. That’s why as a book lover and romance fan, I’ve rounded up the absolute best romance movies based on books.

What are the best romance movies based on books?

I asked book lovers on social media to share their favourite romance movies based on books.  And I also searched on Facebook groups and Reddit. I absolutely loved getting the inside scoop on readers' top movie adaptations

These are suggestions for movies  have already been released. There are some fantastic upcoming adaptations that I'm super excited about. You can check out this post from Booklist queen to see upcoming book adaptations.

Pride and Prejudice follows a group of daughters. Mrs Bennet insists they find rich husbands and settle down. And when a wealthy bachelor moves nearby, she’s very happy.

Keira Knightley’s acting in this movie is superb. You can really see how Elizabeth Bennett and Mr Darcy are drawn to each other. And the cinematography is beautiful.

Emma is a self-proclaimed matchmaker. She meddles in her friends’ love lives. but her missteps lead her to find love.

Both the 2020 and the 1996 versions are excellent. Clueless was based on Emma. So if you like Clueless, you’re guaranteed to enjoy Emma!

I'm a huge fan  of fantasy movies and stardust is such an underrated adaptation. If you like Stardust then you might want to check out my post on movies based on fantasy movies.

You couldn't write a post on romance movies based on books without mentioning The Notebook! This 2004 movie was adapted from the Nicolas Sparks novel.

It follows poor yet passionate young man who falls in love with a rich young woman. This romance gives her a sense of freedom. But they are soon separated due to their social difference.

5. Gone with the Wind

Gone with the Wind is a classic historical fiction originally published in 1936.  It follows Scarlett O'Hara, the spoiled daughter of a well-to-do Georgia plantation owner. She must use every means available to get out of the poverty she finds herself in after Sherman's March to the Sea.

Confession: I'd never heard of Safe Haven before researching movies for this blog post. I am a HUGE fan of a romance movie but somehow this flew under the radar.

Safe Haven is a romantic drama thriller adapted from the novel by  Nicolas Sparks.

But then a series of events draws her into two reluctant relationships. One with Alex, a widowed store owner with a kind heart and two young children; and another with her plainspoken single neighbour, Jo

But as Katie begins to fall in love, she struggles with a dark secret that still haunts her.

Bridget Jones' Diary is the perfect feel good romantic comedy. This is the ideal romantic comedy to watch curled up on the sofa with a big tub of popcorn.

The original book is a retelling of Pride & Prejudice but in a modern setting. It follows Bridget Jones - a 30 something Singleton who is certain she could have all the answers if she could: lose 7 pounds, stop smoking and develop inner poise.

She keeps a diary focusing on how she wants to change her life. But after two romantic encounters, her perspective changes.

While there are some elements of this movie that haven't aged particularly well (notably the parts on weight loss), it's still such a relatable and funny movie.

Crazy Rich Asians is a 2018 feel good romantic comedy based on the novel by Kevin Kwan. The costumes and scenery are gorgeous.

It follows Rachel who is a professor. She's dating Nick and is excited to meet his family. Until she learns that he belongs to one of the richest families in the country.

It's such a simple premise but the plot is really well executed. It deals a lot with family dynamics and social structures.

Jane Eyre is hired by Edward Rochester to care for his ward Adèle. When she arrives at Thornfield Hall she starts to fall in love with Rochester.

But there is a terrifying secret looming within the walls at Thornfield Hall. So what is Rochester hiding from Jane?

Jane Eyre is a great movie if you're a fan of dark academia. If you're looking for movies or tv shows with a dark academia vibe then I have a whole blog post full of recommendations. You can read my article on dark academia movies and tv shows here.

It's a coming of age romance based on the 1999 novel by Nicolas Sparks. The novel was actually inspired by Sparks' own sister who had cancer.

A Walk to Remember is the classic bad boy falls for good girl - but with a twist. Landon is  assigned community service. Part of his punishment involves participating in the spring play. During the play he falls in love with Jamie the reverend's daughter.

Have some tissues at the ready and be prepared to cry.

Love, Simon is a romantic-comedy drama based on the novel Simon vs. The Homo Sapiens Agenda  by Becky Albertalli.

It follows Simon Spier. A sixteen year old who is not so openly gay.  But when an email falls into the wrong hands, his secret is at risk of being exposed.

He's blackmailed and if he doesn't play wingman for the class clown, his sexual identity will be exposed.  Worse, the privacy of Blue, the pen name of the boy he’s been emailing, will be compromised.

Call Me By Your Name is a hugely popular movie based on the popular LGBTQ+ book of the same name. However, it has drawn criticism for the age gap - as one character is 17 and the other 24 years old.

Call Me By Your Name is a romance between an adolescent boy and a summer guest at his parents mansion on the Italian Riviera.

But they're not prepared for the consequences of their attraction. During the summer,  their desire intensifies.  They verge towards the one thing they fear they may never truly find again: total intimacy.

Atonement follows Briony Tallis. She catches her sister in a compromising position. And so she falsely accuses her sister’s lover of a crime.

The story is astonishing. And the movie is beautifully made and filmed. I adore the score for this movie which won an Academy Award.

15. Far From the Madding Crowd

Far From the Madding Crowd follows a young woman. She deals with the trials and tribulations of life. And at the same time, she deals with the attention of three men: a sheep farmer, a Sargeant and a mature bachelor.

Far From the Madding Crowd is a classic novel. And this is an excellent adaptation. Carey Mulligan is always fantastic in classic adaptations.

16. To all the boys I’ve loved before

To All The Boys I’ve Loved Before follows Lara Jean. She has a box of letters addressed to boys she has previously loved.

But someone steals the letters and mails them. And this wrecks havoc on her life.

This movie contains so many tropes I adore: enemies-to-lovers and fake-dating. It’s a light-hearted and easy to watch rom-com. Perfect for chilly fall evenings snuggled up on the sofa.

Get a box of tissues at the ready because Me Before You is super emotional. It's an adorable romance that deals with some really heavy topics.

It follows Louisa Clark. She accepts the job of being a caretaker to Will Traynor. Will has paralysis and is wheelchair bound after an accident.

Will always lived life to the full participating in extreme sports and travel.  Now he's moody and acerbic but Lou refuses to treat him like a child. And soon his happiness means more to her than she expected.

So when Lou learns that Will has shocking plans of his own, she sets out to show him that life is still worth living.

Rebecca is raved about by its fans. It sold 2.8 million copies between 1938 and 1965.  And it has never gone out of print. Also in 2017, English bookworms voted it their favourite book of the past 225 years.

The novel opens in Monte Carlo. The young protagonist is a companion for an American woman Mrs Van Hopper.  She meets Maxim De Winter who completely sweeps her off her feet. And he proposes.

But when they arrive at Manderley country estate she realises how large a shadow his late wife will cast over their lives.

The Fault in Our Stars is such a tear-jerker. It's an emotional romance based on the novel by John Green.

It follows two teenager with cancer - Hazel and Augustus.  Hazel has never been anything but terminal.

She meets the gorgeous and charming Augustus Waters at a Cancer Kid Support group. The two of them embark on a journey to visit a reclusive author in Amsterdam.

This is an emotional, heartwarming and charming romance. You will definitely need a box of tissues handy.

This post was all about romance movies based on books